Shopping Cart
Your Cart is Empty
Quantity:
Subtotal
Taxes
Shipping
Total
There was an error with PayPalClick here to try again

Thank you for your business!You should be receiving an order confirmation from Paypal shortly.Exit Shopping Cart

Have you ever considered what it is like being a dog in your home? We all live busy lives and have jobs and responsibilities and sometimes not much time for much else...Consider the life of your dog. Sure they hopefully have a comfortable place to nap, plenty of food to eat and maybe a fenced yard to visit when they relieve themselves or just want to be outside. Do they wait eagerly for you to return home everyday from work? Maybe a quick hello as you start dinner or do chores. Then maybe a couple hours of down time before bed, rinse and repeat, day in day out. Unless you are the type that is very good about grabbing that leash and getting out for a walk or taking hikes on the weekends with your fur baby, your dog's life maybe incredibly boring!

Truth is your pup has a very short life span and before you know it, it's time to say goodbye. Is your dog's life filled with new experiences and adventures or are you just providing a 5 star prison for your pet? Sound harsh? Maybe, but it is true. Think for a minute about turning off your Cellphone, TV, Radio and sit in complete silence for hours only being allowed to pace the house...you will find this experience uncomfortable after a short while because we require stimulation and variety to feel content. Without new experiences and variety life has little meaning. This is true for your dog too! Consider a walk in a new place, a trip to the Doggy Daycare or dog park or a weekend hike in a state park. Your dog will love you for it!

Socialization, where can I take my dog?

Socialization for puppies is essential to their mental stability. Socialization starting early on with people and later when your pup is finished with vaccinations, with other dogs is vital for you dog to be well adjusted. Some dogs that are not properly socialized become mistrustful of people and can exhibit fear aggression around strangers and in some cases cause them to be over protective of their owner, and sometimes a contributing factor in developing aggression towards other dogs. Here are some places you may not have known that you can take your puppy to expose them to new people and enviornments. Be careful not to force a greeting upon your pup if he/she is aprehensive . Use treats to hand to a stranger to make meeting them a rewarding experience for your pup. 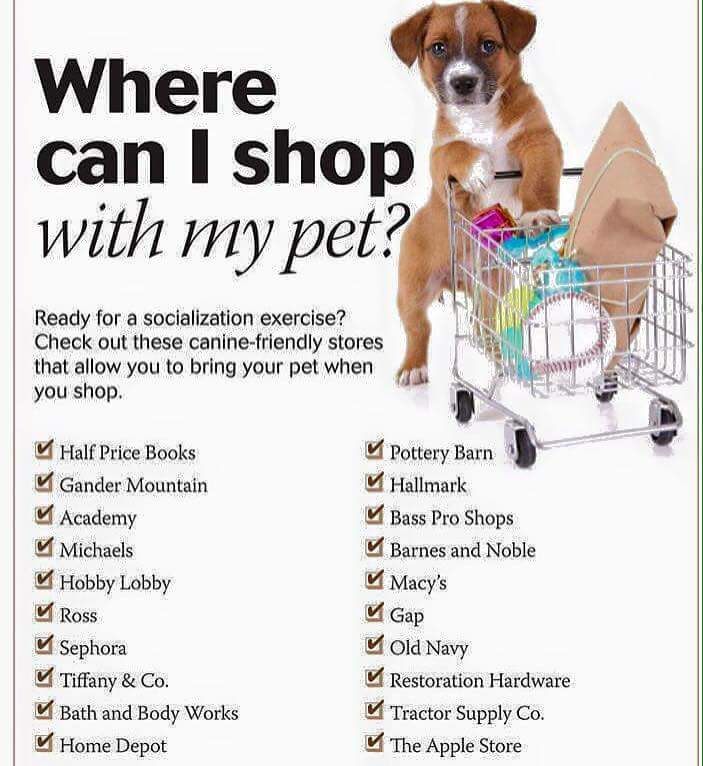 How to save a life

Any Idea what the number one killer of Dogs might be?  Hit by a car, poisoned, neglect, abuse? None of the Above. The number one killer of Dogs is lack of training. How can lack of training kill a dog you might ask? Untrained dogs lack boundaries and expectations, they lack social skills, they don't understand the rules of the house and therefore they can be seen as unruly. Some people with good intentions adopt or purchase a dog and don't really consider the training aspect. Then once frustrated by their pets lack of manners, they end up either leaving their dog tied up in the yard or worse, they surrender them to the pound with the misguided notion that someone else will adopt them.
The fact is that Dogs surrendered to the pound may immediately, or soon after surrender, be euthanized. When a dog is found by animal control they can be kept for up to two weeks awaiting the location of their owner, but when dogs are surrendered they already know that the owner is not looking for them, that they are unwanted and based upon the need for room for dogs that may have owners looking for them, they will euthanize to make room.
Training is the language we use to communicate with our dog. It's how we set boundaries and understand each other. It strengthens the bond between owner and pet. Imagine being dropped in a foreign land where you couldn't speak the native tongue, someone invites you into their home and before long they are yelling at you and frustrated and you have no idea why! This may be how pets feel. Now consider that one day you are shuttled off to a prison and ultimately executed. Sound a bit extreme? Had you just known the language and been able to communicate your good intentions it would have never been an issue.
If you have an unruly dog and you think you have tried everything, what you may be missing is communication skills.